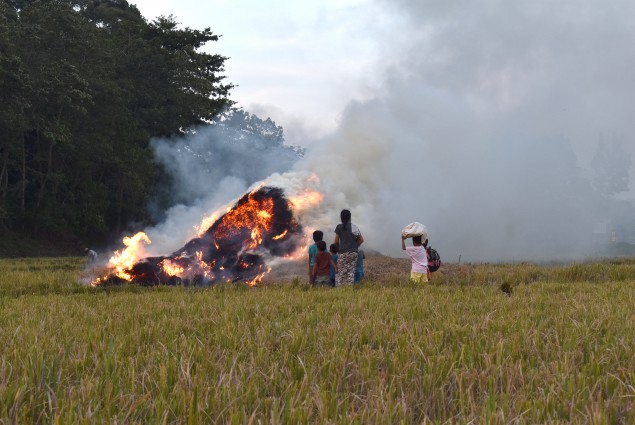 Harvest is fast approaching. At last, Mang Juan will be reaping the reward of more than three months of caring for his rice plants. He’s not only excited for harvest, but also for the rice straw, locally known as dayami, that he will get. This will give him more income as fertilizer and as growing medium for his mushrooms.

Aside from possible lost income, burning of rice straw also emits harmful air pollutants, such as carbon dioxide, carbon monoxide, nitrogen oxide, and sulphur dioxide. If continually done, it will deplete the soil’s nitrogen, 25% of phosphorus, 20% of potassium, and 5-60% of sulfur.

Instead of burning, farmers can opt to do the following:

1. Incorporate back to the soil

Rice straws can also be used as mulch for other crops such as vegetable, to preserve moisture and protect the roots of the plants from the heat and cold. They also help slowdown weed growth.

Rizal G. Corales of PhilRice’s Palayamanan Plus recommended the use of rice straws as substrate for oyster (Pleurotus spp.), Volvariella, Ganoderma, and Calocybe mushroom production.

4. Use as substrate for vermicomposting

Corales also said that the waste from mushroom production is also the main substrate for vermicomposting, one of the best organic fertilizers produced.

“Although rice straws have low protein content (4-4.5 %), it can be sprayed or treated with molasses and urea to increase its nutritive value and feeding quality. The urea-treated rice straws’ protein content ranges from seven to nine percent. When fed to dairy buffaloes, the feed intake is increased by 12%, milk production is improved by 18% and it increases the farmer’s profitability by 33% ,” the Center study showed.