The science behind golden rice 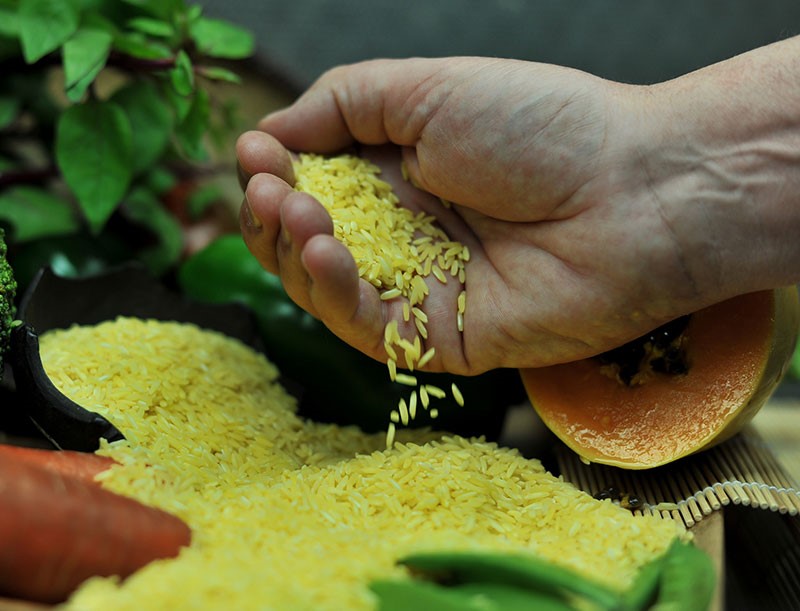 The Golden Rice research is fueled by the passion to help millions of children and pregnant and nursing mothers who are suffering from vitamin A deficiency (VAD), a very pervasive and persistent public health problem in the country.

The 2013 Food and Nutrition Research Institute (FNRI) survey reported that there are 2.1 million vitamin A deficient children (ages 6 months to 5 years old) in the Philippines. This figure is way higher than the 1.7 million affected children in 2008. In addition, about 9% and 5% of pregnant and lactating mothers, respectively, are also affected.

Vitamin A deficiency weakens the immune system and decreases the body’s ability to resist or fight common infections like measles, pneumonia, and diarrhoeal disease, thereby increasing the risk of death, especially among young children. It may also result in permanent, partial, or total blindness if left untreated.

Global statistics showed that half of the 500,000 VAD-affected children going blind every year die within 12 months of going blind. In the Philippines, the projected VAD-attributed death among children is 1,840 per year as reported by the United Nations Children’s Fund (UNICEF).

Such is the fate of Aling Maria’s child (not her real name). A mother of six, Aling Maria lives in a far-flung community in one of the provinces of Panay. Her only girl was diagnosed with severe acute malnutrition and was hospitalized due to diarrhea and pneumonia. Owing to poverty, her family could not afford to buy healthy food choices like fruits and vegetables and only depends on rice for nourishment. Aling Maria shared her dream of having her children finish their education. However, that dream was stolen from her with the loss of her child. Millions of children may also suffer the same fate.

Studies have shown that providing adequate amounts of vitamin A can reduce overall child mortality by up to 24%. Hence, a lot of interventions are being implemented both by the government and non-government organizations to address this malady. These include vitamin A capsule supplementation, food fortification, breastfeeding and supplementary feeding, diet diversification, and nutrition education.

However, despite these efforts, vitamin A deficiency continued to flourish.

One potential addition to these set of solutions is Golden Rice. This genetically-engineered rice is being developed to contain beta carotene in its grain, which when ingested is converted into vitamin A as needed by the body. A 2009 study published in the American Journal of Clinical Nutrition (AJCN) suggests that one cup of Golden Rice could provide up to half of the body’s vitamin A need for the day.  This finding coincides with the result of the simulated analysis study by De Moura et.al (2016), also published in AJCN, concluding that beta carotene-enriched rice improves vitamin A intake and reduces the prevalence of VAD among women and young children.

It is no different from other ordinary rice varieties except for its beta carotene content. It will be planted and managed in the same way. Farmers could also replant its seeds since it is an inbred variety. Meanwhile, consumers need not worry of its price as it is would be similar with the ordinary rice.

In 2016 the project has completed the confined field trial. Results confirmed that Golden Rice is as safe and nutritious as ordinary rice as it is free from any toxic or allergenic properties.

Recently, the project has reached another milestone with the application for field trial and biosafety permit for food, feed, and processing. This is necessary in the conduct of human nutrition study to determine the effectiveness of Golden Rice in providing vitamin A to the public.

Golden Rice will only be made available after completing all required tests and evaluations, and upon approval by the regulators.