When rice pokes a carabao 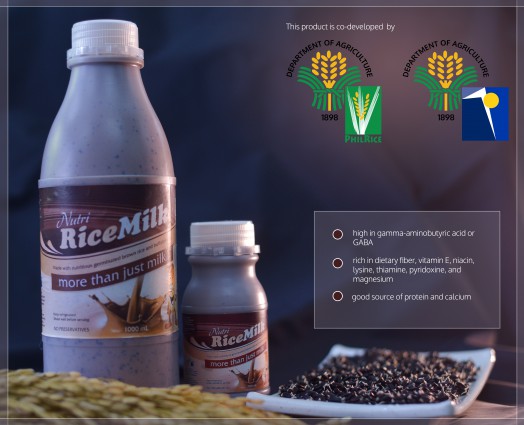 In traditional farming, the carabao has to walk 60-80 km to plow a hectare. The patient beast faithfully does this for the rice to grow healthy as a well-prepared land helps in driving away pests and diseases.

The interaction between the rice and the carabao is quite knitted that when in human forms, they could have easily poke each other – a playful gesture between friends. So it’s not a surprise that in 2014, the Philippine Rice Research Institute (PhilRice), the country’s premier agency for rice research and development, initiated a partnership with the Philippine Carabao Center (PCC), the leading livestock research and development institution, to produce Nutri Rice Milk, a nutritious drink loaded with nutrients from pigmented rice and buffalo’s milk.

From laboratory to pasalubong center

It all started with the germinated brown rice (GBR) study of Dr. Marissa V. Romero and Rodel M. Bulatao, food scientists at PhilRice. After discovering that GBR contains important nutrients, they thought of developing products from GBR as a way of delivering wellness to the Filipino consumers.

They pursued a milk-based beverage with GBR as a major ingredient, also a thesis topic they gave to Jody B. Chavez, then a food technology student at the University of the Philippines in Los Baños (UPLB). Previously called as Rice Beverage, the original formulation comes with powdered milk, blended GBR, and chocolate.

To make the product more luscious and nutritious, Romero and Bulatao thought of replacing the powdered milk with buffalo’s milk and blended it with GBR bits. After Chavez graduated, she became part of the team that optimized the formulation and evaluated the product quality.

As PhilRice does not have the facility for commercial production of dairy products, they proposed a collaboration with PCC. The agencies signed a memorandum of agreement stating PhilRice will produce the GBR while PCC will provide the buffalo’s milk and manufacture the product. Both agencies will be involved in marketing.

In 2014, former PhilRice Acting Executive Director Eufemio Rasco Jr. suggested to increase the production of Nutri Rice Milk for distribution during institutional events such as Lakbay Palay and National Rice for Development conference.

Not your ordinary milk drink

While healthier rice and dairy milk are equally good for the body, this chocolate-flavored milk drink offers more than what you can imagine.

What makes this extra special is that they used unpolished pigmented rice instead of just brown rice (unpolished rice). Pigmented rice such as red and black rice contain antioxidants that can help fight free radicals that cause certain diseases.

With buffalo’s milk, this drink is rich in calcium, protein, vitamins and minerals. In study conducted by PCC, buffalo’s milk has better nutritional benefits over cow’s milk – it is lower in cholesterol and higher in calcium and energy.

A paper titled, “Effects of germination on the proximate composition, antioxidant property and eating quality of brown rice,” was also published in the Philippine Agricultural Scientist, an international journal of tropical agriculture and related sciences. This is published quarterly by the UPLB College of Agriculture and Food Science.

“We achieved our goal in developing marketable rice-based product, and receiving awards and getting published are just icing on the cake,” Romero said.

“What is more rewarding is when you see people enjoy the product while reaping the nutritional rewards from it,” she added.

Abella hopes to venture more on value-added milk products top-up with highly nutritious rice such as in yogurt and ice cream, which they are currently producing. To her, no other agencies can make this idea into reality, just PhilRice and PCC.

PhilRice through its Rice Chemistry and Food Science Division is continuously developing rice-based products that will benefit consumers. “We want our products to reach the local markets that is why we explore partnership opportunities with public and private institutions,” Romero concluded.