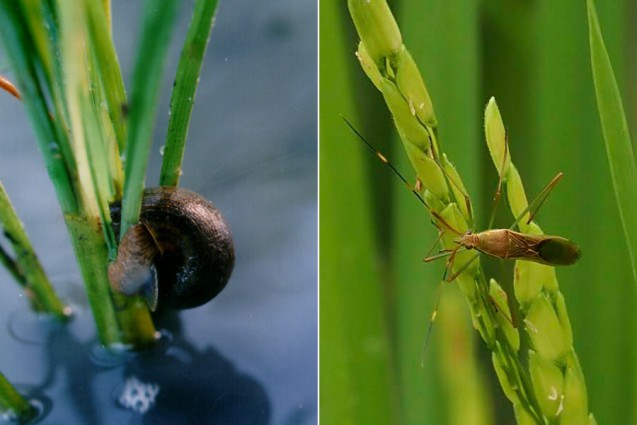 Kuhol (Pomacea canaliculata Lamarck) is considered as one of the notorious pests in the Philippine ricefields. It consumes young seedlings, even devouring a whole paddy overnight. In every square meter, a small kuhol measuring 2-3cm can reduce the number of tillers by up to 19% at 30 days after crop establishment. The loss may increase up to 98% when kuhol population reaches 8 snails/m2.

In the study, 2kg of crushed kuhol was spoiled for five days inside plastic buckets. In five nylon nets, 200g each of the spoiled kuhol was placed and was sealed with a rubber band. These were suspended in wooden sticks and placed in the field at 1-meter distance from the ground and at 10m interval. Two similar treatments were also conducted using fresh kuhol and spoiled fish.

Rice bugs that were lured and entrapped inside the nets of every treatment were collected and recorded.

After four replications in a 6-ha production area planted with PSB Rc 18, results showed that the most effective natural attractants were spoiled and fresh kuhol. They also found that rice at flowering stage was the best time to catch a significant number of male rice bugs using these treatments.

“Rice bug or atangya is a common insect pest in areas where crop establishment is asynchronous and weeds are prevalent. When not properly managed, the insect can feed or suck on developing grains of the rice plant at milking stage; thus, causing yield loss,” Donayre said.

He explained that while insecticides are commonly used to control the damage, the result is not always successful because rice bugs from neighboring ricefields may fly in an area where chemicals were previously applied. Chemical use can also kill the natural enemies of rice bugs.

“Through this technique, farmers can manage kuhol and rice bug population at once while reducing insecticide use, making this technique both economical and eco-friendly,” Donayre said.

The team also recommended that further study must be explored because the biochemical compounds responsible for attracting male rice bugs in the treatment are yet to be discovered.