Getting the youth’s attention 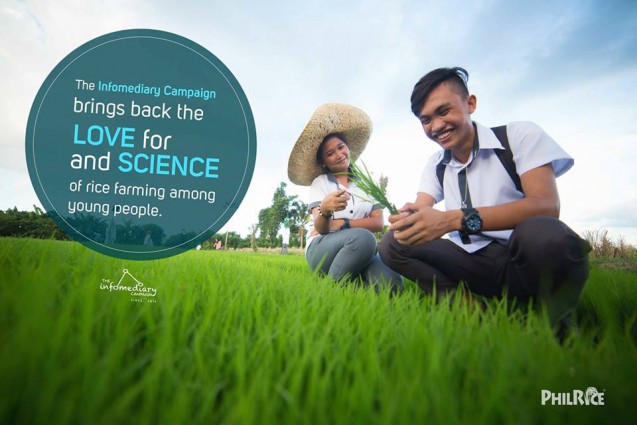 Photos and graphics by Jayson Berto

A global trend is threatening food security.  Many of the young people are evidently leaving rural areas to pursue non-agricultural careers in urban districts.

In the Philippines, a team from Philippine Rice Research Institute (PhilRice) finds a way to help engage the Filipino youth in agriculture. Dubbed as “Infomediary Campaign,” the campaign worked with the Department of Education (DepEd) to encourage the youth to explore the farming sector and to make agriculture an attractive career for the young people.

With the assistance of secondary public school teachers, the campaign discovered the capacity of the young people to influence the minds and cultivation practices of their farmer-parents and of their communities.

An Infomediary Campaign-participating school may have two or more of the following: a rice garden or a Palayamanan setup, lessons on information hubs on rice such as PhilRice Text Center and PinoyRice, and an extension activity on rice farming technologies.

Even before the Campaign started in 2012, there was already a Memorandum of Understanding between the Department of Agriculture and the Department of Education. Hence, it paved the way for the smooth collaboration with DepEd.

In 2012, the campaign was piloted in two high schools in Aurora and in Sultan Kudarat. 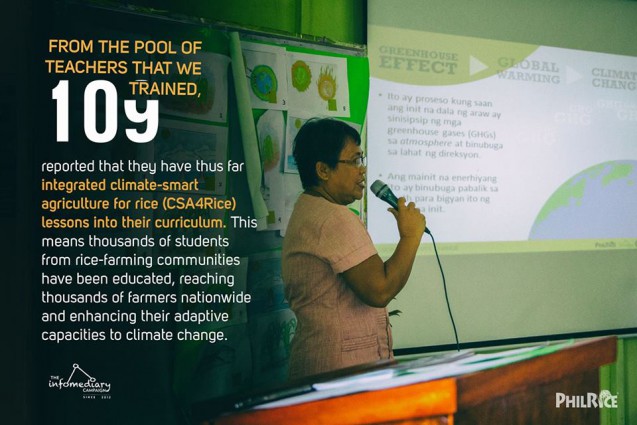 Photo and graphics by Jayson Berto

What exactly happened during and post-engagement?

Bagumbayan Agro-Industrial High School (BAIHS) in Davao Oriental is one of the most successful school-partners in implementing initiatives. Rosalina Y. Saylan, 53, partner-teacher and BAIHS TechVoc instructor, said that since 2013, they are establishing rice garden every dry and wet seasons serving as demo farm for visiting farmers.

“Aside from rice garden grown by students, we sustained the carbonized rice hull production up until now as our school’s income-generating project,” Saylan said.

Malonoy National High School students in Capiz were able to produce seeds, which were bought by rice farmers. The school’s rice garden turned into a venue for Farmers’ Field School several times.

Saylan urged her fellow partner-teachers, who trained thousands of Infomediaries across the country, to never stop in sharing and practicing their expertise, even after project completion. Teaching horticulture to junior and senior high school student, Saylan received invitations from other schools to showcase the technologies she learned during the campaign.

In seven years of implementation, technology adoption initiated by the youth were documented. These technologies include adopting high quality seeds, using leaf color chart and the Minus-One Element Technique, practicing alternate wetting and drying to trying out and/or modifying emerging technologies such as capillarigation.

In the PhilRice Text Center, there are more than 4,000 student infomediaries across the country. Our text center agents have responded to more than 12,000 queries from them since 2012.

Two books have thus far been published about the Campaign: Youth  and Agriculture: The Infomediary Campaing in the Philippines and Communicating Climate Change in the Rice Sector. These books were funded by the DA-Bureau of Agricultural Research. They are recommended for development communicators, extension workers, and policy makers.

Indeed, through collaboration, youth can be steered in promoting cost-reducing and yield-enhancing technologies for crop productivity and sustainability.