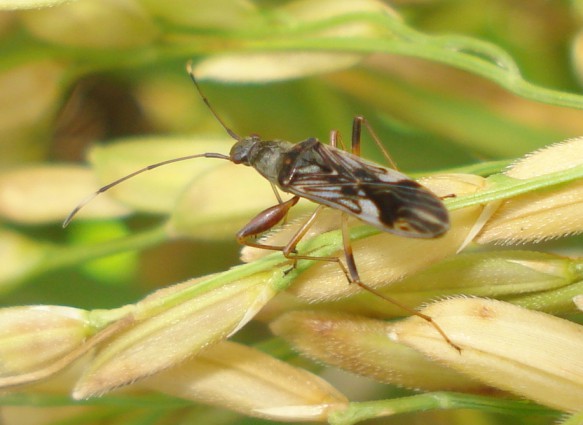 We always get excited for new stuff; however, if it’s a new pest, we worry as it can reduce  37% of rice yield and sometimes, more. This is why PhilRice researchers are studying the characteristics and management of the rice grain bug (RGB), an emerging pest of rice.

Getting to know RGB

RGB (Paraeucosmetus pallicornis Dallas), also known as seed bug, was originally a legume pest. It was first observed in the ricefields of Visayas and was officially documented in 2009. Later on, it spread in Regions V, VII, VIII, and IX. The seed bug was also observed in Regions X, XI, XII, and XIII. In Negros Occidental, as much as PhP 2.4M and PhP P8.4M and damage were recorded in 2017 and 2018, respectively.

A study by PhilRice Agusan researchers showed that the damage caused by RGB on the rice grain is almost similar with the rice bug (Leptocorisa oratorius Fabr.).

Belen M. Tabudlong, one of the researchers, said the nymphs and adults of the new pest feed on the contents of the rice grains, which causes bitter taste (as reported by farmers), discoloration, molding, and unfilled grains. Pot experiments also showed yield reduction by 20-42% depending on the level of damage and pest population. Very few adult RGBs were caught during light trap trials suggesting that the pest is not attracted to light.

“Unlike other insects, RGB usually appears between 9 am-4 pm when the temperature is hot as observed in Kitcharao and Alegria, Agusan del Norte. However, in Marasugan, Compostela Valley, they appear early in the morning and late in the afternoon. They move fast but flies only short distances,” Tabudlong said.

The new pest does not attack the rice plant from seedling to tillering. The same study found that RGB starts to appear during the flowering or milking stages; feeding on alternative hosts, such as weeds, and finally attacking the rice grains from grain filling to hard dough stages. It stays even after harvest.

With the threat brought about by this pest, let’s help the farmers by sharing the following recommendations:

1. Ensure that ricefields are weed-free including those in neighboring areas

Estoy said planting within same period limits food availability for pests. During land preparation, he advised to properly till the field and prolong flooding. Flooding will cause egg spoilage and break its life cycle. He also cautioned against soil transfer from other fields as it may contain eggs of RGB.

Spiders and green and white muscardine fungi (Metharhizium anisopliae and Beauveria bassiana) are enemies of the rice grain bug.

PhilRice study showed that tobacco leaf extract is very effective against RGB causing 100% mortality in only five minutes after exposure. Chilli pepper, neem leaf, and lagundi leaf and lemon grass extracts showed 90%, 85%, and 75% mortality, respectively. Preliminary evaluation also suggests that the pest is attracted to apple cider attractant. As RGB free falls to the ground, Estoy advised to spray near the base of the rice plants to make sure that the pest is exposed to the control agent.

As RGB may have been introduced in rice by rice-legumes cropping system, Estoy suggested to minimize the inter-cropping of legumes in ricefields where there were incidences of RGB infestation.