#10yearchallenge with the first farming app 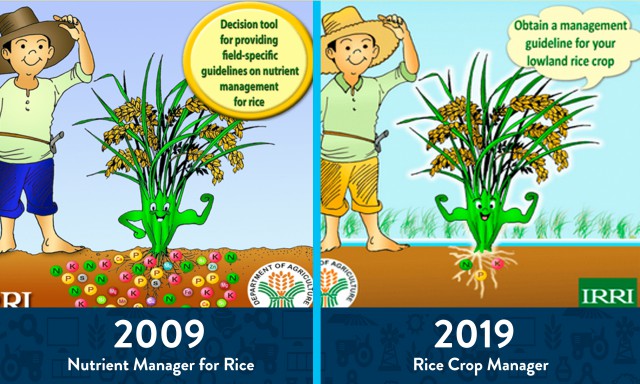 After roughly a decade of fine-tuning and development, Rice Crop Manager (RCM) can also join the so-called #10yearchallenge, a trend flooding the social media when 2019 commenced.

RCM facilitates better rice management practices through mobile or web app farm data collection for site-specific management recommendations.  Being the first rice farming mobile app, recalling its transformations and milestones in the last 10 years serves as a quick stocktaking of what have been and yet to be done.

From Nutrient Manager for Rice(NMRice) to RCM

RCM was an upgrade of the initially tagged Nutrient Manager for Rice (NMRice), which was developed in MS Access and launched 10 years ago. In 2011, it was released as NMRiceTXT, an Interactive Voice Response (IVR) application. IVR allows users to answer questions about their farm by pressing phone buttons and then receive SMS recommendations based on the answers provided.

NMRice became RCM in 2013 when nutrient management advice was complemented with pest, weed, and water management recommendations. This expansion complements the importance of other management areas to achieve higher yield and income.

In 2008, NMRice was accessed offline through CDs released in five Philippine local languages. Its developers further maximized the offline access through IVR; expanding the platforms used from CDs to mobile devices in 2015.

More platforms and channels were later explored, including SMS, web, and smart phone app, making it relevant to wider stakeholders including students and extension workers who might be more interested in online platforms. In 2015, a midseason SMS advisory on the kind, amount, and timing of fertilizer application was launched.

PhilRice-IRRI data show an average yield increase of 0.4 tons (400kg) per hectare and a PhP9,600 boost on net income for the low-yielder bracket (below 4t/ha) with the use of RCM recommendations. The app also generated over 1.3 million recommendations, reached 50,000 farmers, and used in 89,000 fields in the Philippines.

Challenges in the past 10 years

RCM’s #10yearchallenge does not come without the obstacles shaping its development. As cited in IRRI’s impact briefer, weak internet connectivity in the Philippines limit RCM’s widespread scaling despite its promising impact data.

Low adoption of RCM recommendations is also an area for improvement. Philippine Statistics Authority data from 2009 to 2017 showed fertilizer cost as a staple in the top cash costs incurred by the rice farmers. Wilfredo B. Collado, a researcher from PhilRice, said hefty fertilizer cost inhibits some farmers to provide the optimal amount recommended by the app due to limited budget.

Similar to other DA-IRRI-developed technologies, RCM in the next few years is expected to be turned over from IRRI to the Philippines’ Department of Agriculture.