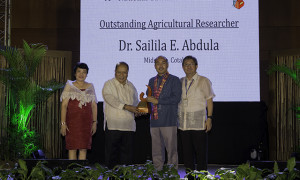 PhilRice Acting Executive Director, Dr. Sailila E. Abdula, was awarded as Outstanding Agricultural Researcher during the 46th National Gawad Saka Awarding Ceremony at the Philippine International Convention Center, December 12. Abdula was recognized for his significant contributions in the research and development of NSIC Rc120 (Matatag 6) and Rc226 (Tubigan 20). These varieties were developed and released to address the tungro rice disease infestation in Southern Mindanao. He was also […]
Categories: News

Poor to zero germination of sown seeds is one of the major problems of farmers who practice direct wet seeding during rainy season. Experts at the Plant Breeding and Biotechnology Division of PhilRice are working on a study titled Germination under water: Wanted trait for direct wet-seeded rice to solve this problem by identifying breeding lines with high anaerobic germination rate. Anaerobic germination is the ability of the rice seeds […]
Categories: News 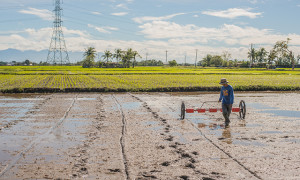 The direct seeding, a crop establishment method where pre-germinated seeds are sown directly onto the soil surface, can help address high labor cost in rice farming according to experts. PhilRice Agronomist Myrna D. Malabayabas said that the method can be done either by dry or wet seeding and does not require seedbed preparation. “The dry direct-seeding method is more commonly used in rainfed and upland areas. It involves sowing of […]
Categories: News

Why is rice-based farming good for farmers and consumers? 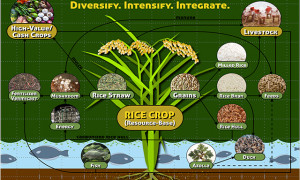 Rice-based farming will increase farmers’ income and consumers will have healthier options according to Dr. Eufemio T. Rasco Jr., of the National Academy for Science and Technology (NAST) and a former executive director of PhilRice. The said approach requires diversification, integration, and intensification of farming practices. “Instead of rice mono-cropping, farmers should also grow other crops, and livestock alongside rice. With the use of existing models like vermiculture, mushroom production, […]
Categories: News